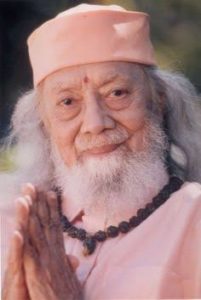 Paramahamsa Hariharananda, a realized Kriya Yoga master, was born as Rabindranath Bhattacharya in the hamlet of Habibpur of Nadia in Bengal, India, the birthplace of Chaitanya Mahaprabhu, on May 27, 1907. He was born into a wealthy family, to a Brahmin father, Haripada Bhattacharya, and an outstandingly pious, generous, and loving mother, Nabin Kali Devi. The child Rabi would be as luminous and brilliant as the sun, removing the darkness of ignorance from the world, as augured by his father (Rabi means “sun.”). Rabi was highly spiritual and cultured, staunch and astute, and well versed in all scriptures. His precocious memory for intricate mantras, hymns, and prayers in Sanskrit, which he learned while listening to his father even at the age of four, exhibited uncommon and marvelous perspicacity. Under the guidance of his father, he quickly mastered Vedic astrology, astronomy, and palmistry.  When Rabi was twelve, Shri Bijoy Krishna Chattopadhyay, a renowned Self-realized sadhaka, initiated him into Jnana Yoga and later inspired him to meet Jnanavatar Shriyukteshwar.

In 1940, he mastered kechari, bhramari, and shambhavi. During this time, an effulgence of supernatural divine light started glowing around his body, producing ineffable awe and spiritual ecstasy in many. In 1940 and 1941, he learned third Kriya from Swami Satyananda Giri. From 1943 to 1945, the last higher Kriya initiations were given by Shrimat Bhupendranath Sanyal, a realized householder disciple of Lahiri Mahasaya. In 1944, he was taught some intricacies of meditation and spiritual life by a mysterious, anonymous yogi. From 1946 to 1948, he attained different states of samadhi, including nirvikalpa samadhi.

After following a strict spiritual practice of sincere meditation and maintaining silence for many years, Mahavatar Babaji Maharaj graced him with two long-cherished visits in 1949 at Karar Ashram, showering him with blessings and prophesizing that his mission would be to spread Kriya Yoga to the East and West. He later traveled to the famous Ranikhet in the Himalayas to visit Babaji Maharaj, but only heard Babaji’s voice instruct him to spread Kriya Yoga throughout the world.

In 1950, he was appointed by Paramahamsa Yogananda as the acharya of the Karar Ashram. From that day on, he worked tirelessly for the spiritual advancement of the disciples on the spiritual path. Aware of his spiritual attainment, in 1951 Paramahamsa Yogananda empowered Brahmachari Rabinarayan to initiate sincere seekers into Kriya Yoga. Thus, he started his long missionary work that took him to the length and breadth of his beloved India. He was also blessed with the highest spiritual attainment, the paramahamsa stage.

On September 27, 1958, Mother Goddess Kali, his presiding deity, appeared before him with all effulgence of light and radiant splendor, instructing him to work ceaselessly for the spiritual uplifting of the world, assuring him of her blessings on his work teaching Kriya Yoga.

On his fifty-second birthday on May 27, 1959, he was initiated into sannyasa by the world renowned sannyasi Jagadguru Bharati Krishna, the Shankaracharya of Gobardhana Peetha, Puri. Casting off his previous name Brahmachari Rabinarayan, he became Swami Hariharananda Giri.

He was later crowned sadhu sabhapati (president) of the Karar Ashram amidst the loud applause and approval of many sadhakas, sadhus, and the Shankaracharya. His spiritual life illustrates the synthesis of karma, jnana, and bhakti practices.

Highly educated and well-versed in many languages, Paramahamsa Hariharananda mastered numerous religious scriptures such as the Bible, Torah, Quran, Buddhist texts, Vedas, Upanishads, Tantra, Patanjali Yoga Sutra, Sankar Darshan, Brahma Sutra, and more. He illuminated their meaning by providing divine interpretations in a new metaphorical way. His writings include Kriya Yoga: The Scientific Process of Soul-Culture, The Bhagavad Gita In the Light of Kriya Yoga: A Rare Metaphorical Explanation for God-Realization, and numerous other publications. For integrating so many scriptures into Kriya Yoga, he earned high praise from all over the world as vishwa guru.

People from all walks of life, from farmers to educators, scientists, ministers, statesmen, civil servants, doctors, engineers, professors, lawyers, judges, musicians, singers, and artists have been privileged to become his disciples and follow his noble path.

Paramahamsa Hariharananda remained extensively in the West after 1990 and his work continues from headquarters on three continents: Vienna, Austria; Miami, USA; and Jagatpur, Orissa, India.

He spent his long life studying, teaching, and fulfilling his mission to share the philosophy and technique of Kriya Yoga with the people of the world until leaving his mortal body in Miami, Florida, USA, on December 3, 2002, at 6.48 p.m. Eastern Standard Time, at the age of 95. Then on the 10th of December, his physical body left the Florida ashram, homeward bound for the distant shores of Mother India to be laid to rest with his forefathers. The Government of Orissa had decided to accord state honors to Paramahamsa Hariharananda upon the arrival of his remains. With a solemn state honor that Orissa had never before bestowed on a monk, Paramahamsa Hariharananda was given bhu-samadhi in Hariharananda Gurukulum in Balighai in the presence of thousands of monks and devotees.

Paramahamsa Hariharananda’s life and teachings have been an example for his students and his worthy successor, Paramahamsa Prajnanananda, who continues to spread his loving message all over the world. The legacy of this great teacher lives on through the love and lives of his students.

Hariharananda Gurukulam is situated in Balighai, 10 km away from the holy city of Puri, in Odisha, India. Situated amidst natural surroundings of forest, fruit trees and beautiful gardens, it is a silent place for meditation, prayer, and worship. It is in Balighai, near the holy city of Puri, in Odisha, India. The magnificent Shri Guru Mandir, the samadhi shrine of Gurudev Paramahamsa Hariharananda and the Temple of Gurus, the lineage of masters of Kriya Yoga is attracting people from all over India and abroad. It serves as International centre for Kriya activities.