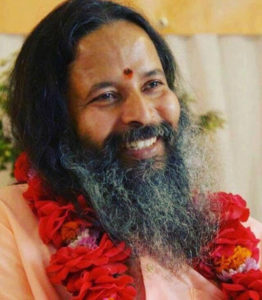 Aglow with radiant wisdom, ever joyful, and reveling in the selfless sacrifice of a silent and secluded monk's life, Paramahamsa Prajnanananda has ceaselessly traveled around the world to promote the message of Kriya Yoga to all who seek liberation. He has written and translated numerous books on spiritual topics, skillfully interpreting ageless philosophies in the light of modern science and technology. Using a simple, succinct, candid style, he demonstrates a broad scriptural knowledge, profound wisdom, and a delightful way with words. Able to focus on multiple tasks at one time with perfect precision and mastery, Prajnananandaji projects a buoyant, energetic God-intoxication.

This world-revered master of Kriya Yoga is the epitome of boundless love, wisdom, and action, representing a combination of Swami Vivekenanda, Shri Shankara, and Shri Chaitanya. What Swami Vivekenanda was to Ramakrishna Paramahamsa, Arjuna to Shri Krishna, Prajnananandaji is to his Gurudev Paramahamsa Hariharananda. Paramahamsa Prajnanananda stands distinguished and unique among saints and sages of India.

Paramahamsa Prajnanananda was born as Triloki Dash in the village of Pattamundai in Odisha, India. Raised in a pious and spiritual atmosphere, he began searching for a spiritual mentor in early childhood. He had always been a sincere seeker of truth.

“When he was born a realized person, a monk, came to his house and told that ‘the boy is a spiritual boy and he will be highly qualified. His memory will be very sharp and he will read extensively all spiritual authentic books of the world. So you please give him the name “Triloki.”' He said, ‘Triloki means one who will rule the three worlds of every human body. One in causal body—the kingdom of heaven is remaining in every human being, which is A. Number two is astral body—the mortal and immortal frame is remaining within every human body, which is U.And number three—the gross body of every human being is the temple of God, which is M. So in each human body there is A-U-M—that is called OM. In future, Triloki will be highly realized and he will purify all human beings and will teach God-realization, which is remaining in all human beings.’ It is why the monk told that God is conducting the whole body of human beings, the boy also in future will teach how to get God-realization.”

In 1992, Paramahamsa Hariharananda authorized Triloki Dash to initiate sincere seekers into Kriya Yoga. He also directed him to travel and conduct classes on Kriya Yoga in various parts of Odisha and Bengal. Then in 1993, with the blessings of this great master, Brahmachari Triloki founded an ashram on the outskirts of Cuttack that was sanctified by the divine visit of his master.

An introduction to Brahmachari Triloki Dash in Vienna in 1994 by Paramahamsa Hariharananda.

He was called to Europe in 1994 by his Gurudev Hariharanandaji to join him and teach Kriya Yoga there. Then in 1995, during a short visit to India, Brahmachari Triloki Dash was initiated as a sannyasi, monk, by Paramahamsa Hariharananda. Receiving the name Swami Prajnanananda Giri, he was directed by his Gurudev the next day to travel to Europe, the USA, and other countries in order to teach Kriya Yoga through public lectures, seminars, retreats, and meditation classes. Long before Triloki Dash became a monk, Paramahamsa Hariharananda predicted, "Whatever is started by me has to be completed by him."

Three years later, Paramahamsa Prajnanananda was given the title of Paramahamsa, the highest title given to monks and saints who attain the summit of God-realization, by his Gurudev on August 10, 1998, on his birthday.

As a speaker at the Parliament of the World’s Religions Conference in 1999, in Cape Town, South Africa, he gave two powerful lectures: “Alleviation of Poverty: A Spiritual Outlook” and “Yoga: The Hope of the Future”. As the president of Prajnana Mission, he has undertaken projects that promote spiritual education, social and health services, and philanthropic works around the world. He established Hariharananda Balashram, a residential school for poor and orphan children in Arua near his own birthplace, Pattamundai. Following his Gurudev's vision, Prajnananandaji created a beautiful ashram with international repute at Balighai, in Odisha, called Hariharananda Gurukulum, and its latest addition, a majestic samadhi temple commemorating his Gurudev.